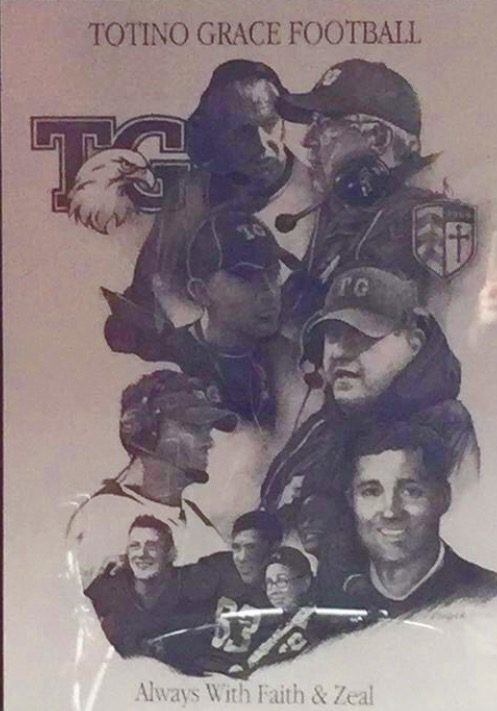 Just like the school’s Lasallian tradition, the players of our football team have always had faith in their team but also love to live life and play like their nickname L.O.D. (Legion of Dawgs). Over the last 50 years, Totino-Grace has had a tremendous football program. Since the school opened in 1966, the team has moved up classes and has won 9 state championships.

Coach Jeff Ferguson has won 7 of those state championships, along with his predecessor Coach Dave Nigon who won the first 2 in ‘78 and ‘79.

The motto for the squad has always been don’t look at the scoreboard. Since the players already play their hardest, the scoreboard will figure itself out.

But great success comes from humble beginnings. Coach Dave Nigon who coached at TG as an assistant coach from 1968 to 1971, and then became a head coach in 1972 until 2002 when he retired from the game. He led TG to their first 2 state championships, but the game was very different back then.

The team even first started without a weight room and had to find ways to get big by themselves. Coach Nigon said “We took pieces of metal, cut them, weighed them, and put them on a bar for an equal weight. Our ‘weight room’ was basically a closet these days.”

Not many people who attend Totino-Grace know that Mr. Ferguson actually played football as a linebacker for Coach Dave Nigon and his right hand man Paul Gasner. Coach Ferguson recounted on his years playing for those two men. “Paul was the offensive coordinator and Dave was the head coach. I would call them both super motivators and very hard-working, prepared men. They laid the groundwork for Totino-Grace football.”

And of course defensive coach Bernie Litecky has been here from the early times of TG on the gridiron. Coach Ferguson shed some light on Bernie’s long career here on the team. “He has been here since the first several years of Totino-Grace’s existence, and he was a sophomore coach during the Nigon and Gasner years. So probably nobody has had a bigger footprint on our football program than Bernie.”

Bernie Litecky has been coaching at Totino-Grace for 45 years.  Bernie enjoys game-planning and seeing the results on Friday night, and his favorite part about coaching is all of the close relationships he has developed with players and coaches over the years.

Litecky said Coach Dave Nigon and Coach Ferguson share similar philosophies. “They apply total preparation for their opponent, they put the team first with a no-star system and sell-out efforts from all of the players. They also love to be positive leaders in our school, pay close attention to small and large details, and they really emphasize fundamentals. They believe that coaches must always continue to learn by either visiting other schools or going to clinics during the offseason. Finally, they read articles that helps to identify the different phases of our great game.”

He also shared their differences. “Coach Ferguson is more defensive-oriented and Nigon was more into offense. Coach Ferguson also initiated a Touchdown Club for parents, which Nigon did not.”

Finally, Litecky is one of the four coaches included in the MCFA (Minnesota Football Coaches Association) Hall of Fame along with Paul Gasner, Dave Nigon, and Jeff Ferguson. “I am very humbled about being inducted. I often ask myself, how am I possibly in the hall with such coaching legends like Bud Grant, Bernie Bierman, and John Gagliardi.”

There also have also been many coaches who played at TG and have come back to the school to help out the program beyond Ferguson and Bernie Litecky.  These people include Brian Litecky (Running Backs coach) , Pat Hinnenkamp (JV Offensive Coordinator), Anthony LaPanta (Freshman head coach), and many more.

Coach Ferguson explained why coaches coming back to assist the team well beyond their playing time is important. “It means a lot to me as the head coach, I have a number of assistants that could for sure be running their own programs elsewhere and yet they choose to stay here. I think they stay here because they are invested in the program, they are proud of it, love our kids, and believe in the mission of the school which has a culture of improvement because in all areas they see great things happening around our building. I think it’s huge and I appreciate our coaches for staying intact.”

Ever since the early coach Nigon arrived at TG though, the game has changed big time. Nigon explained those amendments to football. “It’s become more complicated. The talent level of athletes has grown immensely from being bigger, faster, and stronger. Their diet, strength programs, and offseason activities have played a huge part in their continued success. Also most teams run plays no huddle, have more creativity on special teams, and run plays out of the shotgun spread.”

“In the summer coaches can coach their teams for 11 days  which we couldn’t do in the past where schools could not have their own camps like TG’s June camp but players can go to other camps around the area. But the rules changed when we invited a group of players to come in and we ran a Wing-T camp. Then in the future we went to an annual South Dakota State camp which is still running now with teams all around the upper midwest competing. After the camp period though we could only lift and we could not scrimmage like nowadays.”

“The game has also gotten safer with better concussion protocol, way less hits from head to head contact, and rules that promote the well-being of the students playing football.”

Hudl has also revolutionized not just the game of football but all sports in helping athletes improve and see their mistakes and great plays on an easy method to gather, collect, and watch film.

Coach Ferguson gave some reasons on why Hudl is so much more advanced for film than it used to be. “When I started coaching we used 16 mm film and there was one place in downtown Minneapolis called Sly Fox and after every game coaches all around the state would come down to Sly Fox to have their film developed. Then you would have to wait for 3 hours to get it so some coaches sometimes got theirs at 2 a.m. and then they would come back to school and cut every offensive and defensive series and place them together with band-aids or tape. We would then hang the film up, it was incredibly tedious! Those were only our own game films.”

“For opponents we would send our JV scout coaches to go to games and scout for our future opponents to give us a heads-up for an upcoming foe. They would write up their plays by hand and it’s really hard since we couldn’t tell if for example if the play was a trap or a counter. With Hudl we don’t have to send out coaches to sit in the cold and watch another game, and it’s also easier for colleges to check out incoming recruits highlights as well.”

Coach Ferguson commented on the team moving up classes. “In the last four years we’ve played in the biggest class (6A) and each of those years we’ve made the final four so I think you could agree that’s where we are suited since our kids overachieve. ”

Before Coach Ferguson began his coaching campaign as an Eagle, he was a defensive coordinator for 16 years as a Bengal at Blaine High School. “The funny thing is the majority of the time I coached at Blaine I was a biology teacher here at TG. Our teams had great success including a state championship in 1988 and a number of Prep Bowl appearances, so we were one of the metro powers at the time, so I kept coaching there. But then in 1996, TG opened a position as an Associate Dean of Students beside Dave Nigon, and I got hired but I had to quit my coaching at Blaine. My first year in 1997 I did not coach football anywhere since the school did not want two deans both coaching football, but later the school allowed me in ’98 to start helping the team out, and I coordinated the defense here till 2001. Then when Dave left in 2002 I took over as head coach.”

Coach Ferguson explained how he fostered a winning tradition into the school’s football program. “It’s how we define winning. We don’t talk about getting wins, we talk about doing things the right way and preparation. If you take care of the things that define the Eagle Way then the scoreboard will take care of itself. I think people who are obsessed with the score and who talk a lot about winning play on eggshells, worry, and stress out. I don’t want our guys to be uptight I want them to go out there and have a blast. And when the game is over we can see how well we did.”

Many people also know that John Crockett (currently a running back on the Green Bay Packers) spent his high school years learning under the influence of Coach Ferguson and his staff. Coach Ferguson explained Crockett’s time during high school in the years of 2006-2010. “He’s a kid that grabbed your heart. At one point I thought one of us was gonna kill the other because he was quite a handful! He was super charismatic and energetic, but he suffered from a case of ADHD. He also had some familial challenges as well, and he was basically homeless in his junior year. He couch-surfed from place to place. He didn’t just have to worry about his homework each night, he had to worry about where to sleep. So he had a lot of obstacles even academically but his determination helped him overcome those by making great strides and by our teachers here committing to help him. Yet he still couldn’t qualify academically so he couldn’t get into a college. He had to go to North Dakota State and not be a student there but enroll in the junior college for a whole year. Then once he proved himself he got admitted into the university but he was still ineligible to play. So for two years John even couldn’t put a helmet on! His determination though helped him actually play for two years in college and as we all know he was a great competitor.”

Nigon and Ferguson emphasize to every team to not worry about the scoreboard and just give sell-out effort, buy into preparation, and play your hearts out.  Once the clock hits 3 zeroes, the scoreboard will take care of itself. Clearly this program does not care that much about wins and more about growth and playing at the best you can play. That says a lot about what we can do as students. Even though we don’t sometimes get the score on the test we want, we can grow and give it our best shot the next time.

Totino-Grace football is a program that hopefully has not reached it’s peak. Hopefully the team can keep on improving and excelling to win finally that elusive 6A state championship that all the fans and players have all waited for the past 4 years.

Coach Ferguson ended the conversation by talking about the philosophy of the football team. “It’s not about you, it’s about we, building the brotherhood, and since we are in a time when society wants to pound in the message of what’s in it for me we should instead think about what can I give. Everyone on the team is important and valid as well. But most importantly don’t worry or be concerned about the score and just play the best you can. That’s the main belief of the Totino-Grace football team.”