The Call of the Cosmo 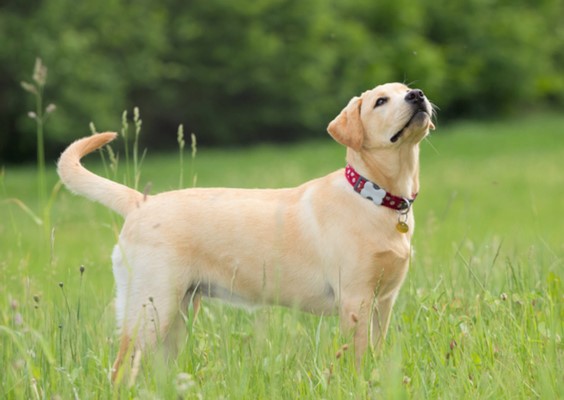 Have you ever lost something that is personal to you? You see it, have it, or use it every day and can’t go hours without it. You get attached to it and have a special bond with it. Now imagine that something is your dog. The saying “Dogs are a man’s best friend” is especially true when they are one day missing and nowhere to be found.

Last Saturday, April 21st, my friend’s neighbors lost their yellow lab and could not be found. They have an electric fence surrounding their house but it was not working that day. In the neighborhood, construction was happening and the neighbors think that the loud noises scared her and made her run. Hours went by, and the neighbors began to get worried. They talked to most of the neighborhood to look out for her and put pictures out on social media to try to help to find their dog, Cosmo. Cosmo is around four years old but she has a lame hip that is weak. This made the neighbors worried because most of the neighborhoods backyard is woods and a big pond that still had ice over it except for around the edges. They were worried that their dog either got too tired and tried laying down in the woods to rest her leg and hip, or that she somehow fell into the freezing cold pond and could not get up and out.

As it continued to get later into the day and there was no sign of Cosmo, my friend’s mom began to get nervous. Like her, anyone who has a dog will have sympathy and feel the pain of those who have lost their dog and do not know what to do. My friend’s mom sent her husband out on the frozen over pond and into the woods to try to look for Cosmo. Social media post were out, neighbors were walking and driving around the neighborhood searching. Not knowing how far she could have gotten in the time she has been gone. Around five o’clock, my friend’s dad began to go out and search again in hopes of finding her trails. At this same time, my friend and I were about to leave to go out to dinner. Instead of getting into our car right away, my friend insisted on going out to the backyard to hit a golf ball onto the pond. As I came out of the garage into the backyard with him, I heard a noise. Looking at my friend, we both listened as we heard two more noises that seemed to be close by. Something was howling. Immediately thinking about Cosmo, I ran inside to tall my friend’s mom what we heard and I ran back out. My friend and I started to go down the backyard hill that was full of small trees, twigs, plants, snow, and dirt. Trying to go as fast as we can down this steep hill, we were heading towards the pond, searching for the missing dog. I could see her not too far away, howling for help as she was chest deep in the water and shaking frantically. She was around ten feet away from us, with water and cack tails between us.

My friend’s mom called over the neighbors and got her husband’s attention to travel over to where we were. The dog was whimpering and all I felt helpless just standing there and watching her. Soon, my friend’s dad made his way over to us on the ice. He was able to walk over to Cosmo, pick her up, and grab her out of the water. He tried to put her on her legs, but her lame hip and freezing cold temperature kept her from doing that. He picked her up and began to walk back the way he came, looking for a way to walk back over to the house without having to go through water. The neighbors, my friend’s mom, and my friend and I grabbed towels and waited for him to bring Cosmo over to us. The neighbors began to tear up in happiness that we had found her, and we wrapped her in towels to try to stop her from shaking. It was amazing to see the look in the neighbors eyes of relief, and to see the dog slowly begin to be back to herself.

Cosmo is now safe is her owners home and healthy. Although it was a scary day full of emotions, in the end it was a great learning experience and made it a good day when we finally found her. Keep the things that matter most to you close, and never let them go.