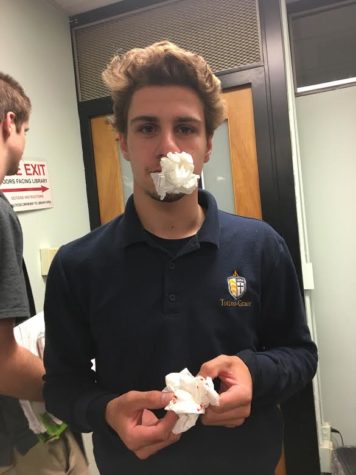 Many high school students have been suffering from these bloody messes. In our school, bloody noses have become an issue. With multiple students erupting with blood almost every class period, I want to get down to the facts and figure out why this happens.

Nosebleeds are common, and while the cause may be unclear at first, most cases are minor and can be managed from home. Immediate causes of nosebleeds include trauma to the nose from an injury, deformities inside the nose, inflammation of the nose, or, in rare cases, intranasal tumors. Any of these conditions can cause the surface blood vessels in the nose to bleed. Some do get their nose cauterized, in hopes of ending the cycle of blood flow.

Sudden and inexplicable nosebleeds may seem scary, but typically they’re not. Gavin Lemay, a sufferer of these gushers says “whenever I feel it coming I just think ugh! Not again! Honestly could be a vampire, to be honest…” But, the solutions to stop these from happening is using a humidifier when sleeping, to help the nose from drying out. Lemay experiences nose bleeds 5 to 6 times a week.

Another victim, Ben Iannazzo has been experiencing bloody noses since he came out of the womb and says he gets them about once a month. He doesn’t ever want to get surgery because he thinks it would hurt too bad but the worst part about bloody noses is the fact that he “can’t get in fistfights and show his masculinity in fear of a dangerous and messy gusher”.

In conclusion, bloody noses have really taken a toll on our students here at Totino-Grace. The best thing to do is find a kleenex as soon as possible and stay calm.